404 Retrograde – The Expanse Podcast – Tales From The Rocinante 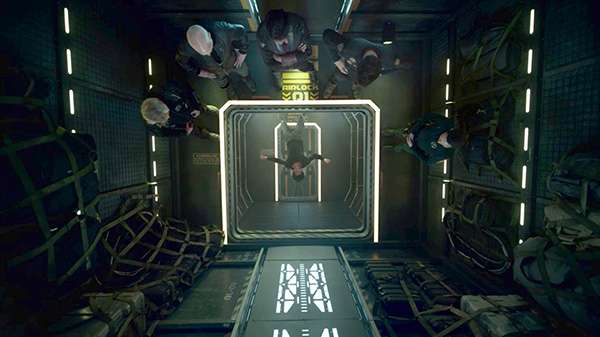 This week we discuss the fourth episode of season 4 of The Expanse titled “Retrograde”.

The episode opens immediately after Murtry’s mass killing from episode 3. Naomi, with the help of a distraction from Amos that lands him in custody, Naomi manages to slip the now hunted Dr. Lucia out of the camp. If she can get the doctor to the Roci they’ll be safe.

Meanwhile, Holden, Alex and Dr. Elvi are examining the aftermath of the Rocinante’s missile strike on the mysterious Protomolecule device. Jim and Alex are content that the device is now inert, but Elvi isn’t happy with the situation. She knows the two are keeping things from her and she wants to know what.

Whatever they were going to do next is cut short when Naomi informs Jim of Murtry’s actions.

Holden calls Murtry and the two butt heads to no avail and then Jim and Alex head off to rendezvous with Naomi.

Lucia and Naomi navigate a back route to the Rocinante. Lucia confides in Nagata that she was in fact, along with the now-dead Belters, responsible for the crash of the Edward Israel shuttle.

They make their way to the base of the ridge where the Roci is parked but Murtry is one step ahead of them and he shoots and injures Lucia when they break cover.

Holden is concerned when he can’t reach Naomi. He heard the pain in her voice and thinks she’s hurt, but Alex comes clean about her condition and how gravity is affecting her.

Naomi remotely engages the Rocinante’s point defence cannons and the distraction allows them to reach the ship with the help of Jim and Alex where both women are hooked up to the ship’s medical facilities.

Later, Elvi and Fayez discuss Murtry’s actions and their options. With the lack of any clear direction, Fayez suggests they do what they came there to do and study the planet. He shows her that there’s more seismic activity on the continent, lots more. He also discovers that several islands on the planet are generating massive amounts of heat.

Back on Earth, Avasarala is frustrated with the lack of information coming from Ilus.

Later in an interview, she expresses her disappointment in learning about Nancy Gao’s checkered past in defrauding the government.

On Mars, Bobbie tries to come clean to her foreman about her involvement in the theft from the dockyards.

To her surprise, the foreman wants in on the action and asks if she can make it happen again. Disgusted, she quits her job and walks out.

Unfortunately, with so many veterans returning to Mars, jobs are at a premium and there’s nothing available for her.

She later confides in her fellow Marine Thomas how disenchanted she is with the current state of Mars.

Back at home, Bobbie, her brother and David are in a heated discussion when the police arrive and arrest her for grand larceny. She uses her one phone call to ask Detective Esai if his offer still stands and she agrees to work for him.

Out in the belt on board the O.P.A.S. Tynan, Ashford and Drummer take Marco Inaros into custody.

Drummer inquires as to the whereabouts of Filip, Naomi’s son. He recounts how, in their youth, he and Naomi destroyed a ship together. Her coding skills and his coordination made it possible.

After the incident, Naomi was haunted by what she had done. The pain of killing a ship full of people overcame her love for Inaros and she left him and their son behind.

Ashford informs Drummer that Marco’s people are pursuing them. They’re evenly matched so the best course of action is for them to run.

Marco warns them that if anything happens to him there will be retaliation on Ceres, Tycho and possible Medina Station.

A problem with their ship causes them to lose ground.

Marco tries to appeal to Ashford by reminding him of what they come from. Truce or no truce, they will always be Belters to the Innards. The resources are now available to make the Belt a paradise. All they have to do is take them.

Ashford says they don’t have the ships or guns for that fight, but Marco tells him not to be so sure of that. Mars isn’t the treat it used to be but refuses to elaborate.

The whole thing was a ploy to get Marco talking but it didn’t work.

At Ashford’s signal, ships from Black Sky, Golden Bough and Matar Kubileya reveal themselves and Marco’s people break off pursuit.

Ashford and Drummer were never planning on turning Inaros over to the Innards.

Later, representatives of the different Belter factions hold an informal trial on Marco Inaros’ fate. They plan on executing him but Marco reminds them that the crimes they are accusing him of are no less than what any of them have committed.

They all believe that the appearance of the rings somehow changed things but he tells them they’re wrong. The Innards have always taken what they need from Belters and they’ll do the same with the 1300 new worlds.

Ashford and Drummer want to shut him up but the other faction representatives vote to let him have is last say.

Marco reminds them that the OPA, regardless of factions has always fought for the rights of all Belters and nothing has changed.

A ring appears and they are now expected to make a truce with the Innards and hunt down their own kind?

While the innards take advantage of new planets that Belters can’t even live on?

How does the appearance of a ring suddenly make the Innards just, fair and kind? Do they really think the Innards will honour their new treaty?

The war between Earth and Mars made the innards weak, and their just buying their time as they build up their strength enough to no longer need the Belter’s help.

Marco offers to hand over the gains from his recent activities and wait patiently for the Innards to break their treaty, which he’s certain they will.

The five representatives put Inaros’ fate to a vote. It’s a two-two tie until Drummer, much to Ashford’s surprise votes to spare Marco’s life.

She later explains she did it to avoid a civil war between the OPA factions. Ashford feels like they lost their only chance to take Marco Inaros down.

Back on Ilus, Holden says bye to Naomi as she and Alex take the Roci back up to orbit. As the ship lifts off he comes face to face with Murtry and punches him in the face informing him that he’s no longer in charge.