402 Jetsam – The Expanse Podcast – Tales From The Rocinante 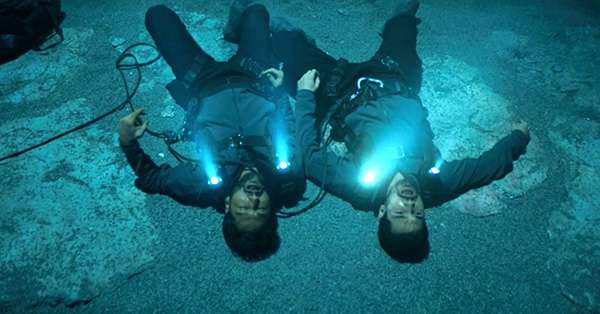 This is the Most Scientifically Accurate TV Show – YouTube

The Macroeconomics of “The Expanse” – Article

This week we discuss the second episode of season 4 of The Expanse titled “Jetsam”.

The episode opens with a distorted view of Miller’s perspective. He’s trying to figure out what happened to the Protomolecule when he notices a small spark of something on the planet New Terra.

On the planet, everyone is recovering from the swarm attack, and wondering if they’re what caused the crash of the Edward Israel’s shuttle.

On Medina station, Drummer and Ashford are investigating a mysterious group of human bodies that hurtled through the gate before disassociating when the hit the ring periphery. They extrapolate from their trajectory that they came from the UN colony ship Sojourner after being attacked by pirates.

Drummer doesn’t see a reason for the attack, but Ashford thinks it’s a message that some Belters are not happy with the new peace between Earth, Mars and the Belt.

The U.N.N. reluctantly shares their findings from the attack with Medina Station as tensions between the three factions remains high, even in this time of peace.

The new information helps Ashford determine who the pirate is that attacked the Sojourner. One Marco Inaros who has a past with Naomi Nagata.

They reach out to Anderson Dawes and Fred Johnson to sanction a bounty on the pirate.

On her way to Mars with a delegation including her husband Arjun, Avasarala isn’t happy to learn the Protomolecule may be active on New Terra.

Meanwhile, On her way to work, Bobbie receives an invitation to attend Chrisjen Avasarala’s address to Mars. This brings in the question of her loyalty to Mars when she’s later questioned by police about the death of a Customs Inspector.

Later, at the official gathering. Avasarala and the Martian Prime Minister are questioned about the timeframe for distributing and colonization of the 1,300 new planets beyond the rings. Neither commits to anything.

Bobbie arrives and feels out of place as her presence at the gathering is questioned. However, her placement at the table next to Arjun Avasarala helps ease her tension.

Chrisjen gives a moving speech on lasting peace between Earth and Mars and points out the dishonourably discharged Bobbie as one of the courageous soldiers from the war.

After the dinner, Avasarala asks Bobbie to come work for her but the ex-marine walks away.

Draper is brooding at home when she decides to follow her nephew to see where he’s going at such a late hour.

She tracks him to a drug lab run by his girlfriend LeeLee. Bobbie takes matters into her own hands and attacks the two thugs and LeeLee before leaving with David.

Back on New Terra, Alex and Dr. Lucia Mazur set up a test to determine if anyone cut in the swarm attack is infected by the Protomolecule.

They test the citizens but everyone is clean.

Alex is warming up to the Doctor when she introduces him to her husband and daughter, putting an end to his intended advances.

Amos and Murtry take a look at the Israel’s shuttles crash site to see if the metal swarm could have caused it. What they find instead is that someone blew up the landing pad.

Back at the settlement. Murtry confronts the town’s leader accusing the settlers of attacking his shuttle and killing his people.

Murtry threatens retaliation if they don’t produce the people responsible for the bomb by morning.

Amos stays behind at the bar drinking and is later joined by Wei, Murtry’s second in command. The two ending up in bed together.

Later a couple of Belters confront Murtry. One of them makes an idle threat and Murtry kills him for it.

Naomi and James join Dr. Elvi Okoye in her lab to try and figure out what the swarm of small metal “insects” are. Upon closer examination, Holden determines that they are made of Protomolecule tech.

They travel to one of the non-native towers found on the planet. From their initial scans, the Edward Israel determined that they disappear deep below ground. Deeper than their scans can penetrate.

Their investigation reveals a solid structure with no way in. Analysis dates it at 1.5 billion years old. Holden says the structure feels dead.

Later, back on the Roci, Naomi passes out from the effects of the planet’s gravity on her system. Her cardiovascular system isn’t strong enough to deal with the strain.

She asks Alex not to tell Holden. James has enough on his mind already.

That night, Miller comes to Holden. James was on the right track but there’s more to be done and Miller needs Holden’s hands to do it.

Drone footage shows the solid structure they investigated earlier now has openings in it so James and Alex head off.

The entire front of the structure has swung inwards like a door revealing a chasm below. Holden descends where Miller asks him to remove some roots from some ancient mechanism.

Miller confesses to Holden that he hears the voices of the hundred thousand people who died at Eros in his head.

When Jim removes the roots, the machinery starts operating and the door he came in through starts closing. It’s a mad scramble but he makes it out with no time to spare.

The newly activated machines across the planet start firing lightning blasts into the air.