303 Assured Destruction – The Expanse Podcast – Tales From The Rocinante 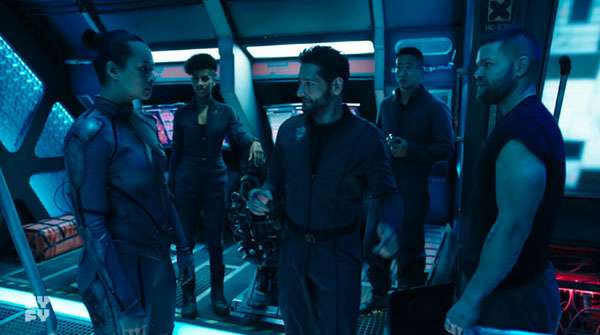 Railguns and Plasma, oh my!

The episode opens on board the Rocinante. Avasarala is in rough but stable condition.

Tensions are high as the crew wants answers from Bobbie, but she’s obviously holding information back.

Holden is unperturbed and decides to simply continue with their mission to IO. Bobby opposes saying the Under-Secretary has vital information that could end the war, but Jim puts her in her place saying they don’t owe her anything and she’s free to get back on the Razorback and leave any time she wants.

When Naomi scolds Holden for the way he’s acting he tells her, she can leave the ship as well if she doesn’t like it.

Amos and Prax continue their bonding over small talk. Amos is convinced they will find Mae, Prax isn’t as sure.

Later, Naomi fixes the Razorback’s comm system, and for a brief moment contemplates heeding Holden’s suggestion that she take the ship and leave for Tycho.

Alex confronts her about it later. He says he’s still angry that she gave the Protomolecule to Fred Johnson but he admires her commitment to the Belt. He wishes he had her strength.

When Chrisjen regains consciousness, she finally meets Holden face to face. She tries to convince him to let her contact Admiral Souther on the Agatha King, but he won’t hear of it.

When she tells him she’s trying to prevent the Protomolecule from falling into the wrong hands he tells her he’s heard it all before. Including from himself.

On their way to IO Alex receives a message from his wife. They thought he was dead for so long. They’re happy he’s alive, but that they’ve moved on and don’t need him anymore.

With everyone gathered, Chrisjen finally comes clean and tells them all what she knows about Jules-Pierre Mao, Errinwright and the Protomolecule. She tells them she believes Errinwright plans on using the hybrids to lay waste to Mars and she needs their help to stop it.

Holden then tells them about their own encounter with a Hybrid and how they believe they are being created on IO using the kids.

He then drops a bombshell by telling her that Fred Johnson already has a sample of the Protomolecule.

She confronts Naomi about what she did and then surprises them all when she agrees that they should simply nuke IO and destroy the Protomolecule.

When Naomi later confronts the Under-Secretary accusing her of wanting to go to IO to get the Protomolecule for Earth. Avasarala neither confirms or denies the accusation.

They’ve detected two of the five known platforms, and if they can find the other three before Mars moves them, they’ll be able to eliminate them with their planetary rail guns.

A preemptive strike would have to be perfect, or else Mars would retaliate, and the casualties would be enormous.

The possibility of casualties causes the Secretary-General to hesitate, but Errinwright is pushing him to attack.

Later, Anna is helping the Sec-Gen to write his speech, but his mind isn’t on it. He asks her a hypothetical question about facing fear to try and settle the upcoming decision he has to make regarding the Mars missile platforms.

She asks him how many sacrifices he can tolerate and still tell himself he’s doing God’s work. The answer she says is as few as possible.

When the 5th platform is discovered, and he’s told there is an 82% chance to successfully destroy them he backs down, saying the chances of casualties are too great.

In private, Errinwright confronts the Sec-Gen about his choice. He manages to convince him that if he wins the war, he will be remembered as the man that united humanity in the face of first contact.

The plan works, and the Secretary-General orders a strike on the Mars Missile Platforms. A glitch in one of the railguns delays its firing and the Missile platform manages to launch a missile before it’s destroyed.

The missile strikes Earth in South America killing 2 million people. The railgun misfired due to a glitch caused by the earlier power up and power down.

In the aftermath, Errinwrite tells Anna that all the casualties could have been prevented if only the Secretary-General hadn’t wavered earlier in the day. Putting the Unspoken blame on her.

In the depths of space, the U.N.N. Agatha King detects the Mao dropship. Before they can intercept it, they receive a message from Admiral Nguyen that he’s on his way and whoever is on the dropship is to be detained without debriefing.

On the dropship, Theo, the Mao electrician is panicking, not sure what to tell the Agatha King once they’re rescued. To protect himself and Avasarala’s mission, Cotyar kills the man.

Later with Cotyar in custody, Admiral Nguyen briefs Admiral Souther on his orders to bring in Under-Secretary Avasarala on suspicions of treason.

They interrogate Cotyar but don’t get anything from him. He spins a story that Chrisjen is dead and that Bobby escaped on the Razorback.

They don’t believe him when he tells them the Guan Chin was destroyed by a U.N.N. Gunship and that it’s Errinwright who has been working with Jules-Pierre Mao and who is the true traitor.

After the interrogation, Admiral Souther creates a diversion to talk to Cotyar alone. He knows Chrisjen is not a traitor and he gets the true story out of the spy.

Suspicious, Admiral Nguyen relieves Admiral Souther of command and takes over the Agatha King and heads towards IO.

On IO, Katoa shows off some of the new abilities he’s developed from Doctor Strickland’s new treatments.

Later, Mao meats Mae and he’s taken in by the young girl’s charm. When Katoa collapses, Mao seems genially concerned for the children.

Doctor Strickland sees it as a simple setback, but Mao orders him to stop the experiments. He wants the torture of the children to end.

Strickland protests but Mao tells him it’s not up for debate. The experiment is over, shut it down.