Posted by Solo Talk Media on March 4, 2017 in The Expanse Podcast - Tales From The Rocinante | 1 comment 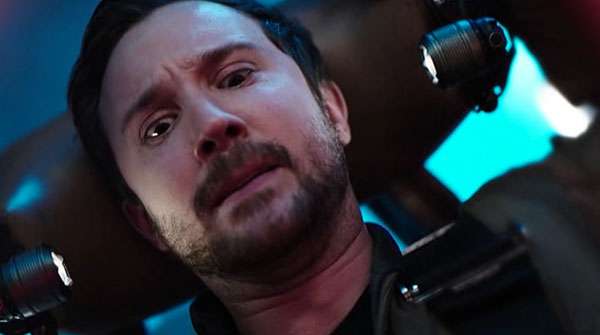 This week we continue season 2 of The Expanse with the episode titled “Paradigm Shift”.

Science And Tech In Syfy’s ‘The Expanse:’ The Spectacular Launch Of The ‘Nauvoo’

The episode starts 137 years ago above the United Nations Mars Colony long before it became The Martian Congressional Republic.

Solomon Epstein is testing the new modifications he made to his yacht’s fusion drive. In the process, he turned off the problematic voice controls leaving only touch controls available.

The new drive worked much better than anticipated, boosting efficiency by over 100 times more than anyone thought possible.

Unfortunately, Epstein’s breakthrough was also his downfall. The high Gs he experienced made his body so heavy that he couldn’t reach out to press the abort key.

As his ship reaches speeds never before dreamed of he’s comforted in the knowledge that his wife has the plans for his new drive system and it will set her up financially for life. As the G force finally overcome him, he imagines that his invention will allow Mars to travel outward, colonize the belt and beyond. His drive will finally give Mars the edge they need to break away from Earth. That’s the wonderful and terrible thing about technology. It changes everything. And with those final thoughts, Solomon Epstein perishes,

On Earth, the U.N. Council is debating what happened to Eros and they can’t come to a consensus as to who, what or why it acted like it did. They plan on sending a research ship to Venus to study the impact area and see if anything from Eros survived.

They also mention that of the 150 missiles they launched, 121 are confirmed aborted and destroyed, but the remaining 29 are nowhere to be found.

Later, Avasarala has dinner with Dr. Michael Iturbi to discuss his thoughts on Eros. His theory is that Eros was infected by something alien. He tells her he needs to get to Venus to study the matter. If she can arrange it, he would be her own personal eyes and ears reporting all his findings directly to her.

Later, Avasarala goes to see Errinwright about Jules-Pierre Mao. She wants him to convince Mao to come in so they can learn what he knows. She’s willing to cut the man a deal because of the stakes involved. However, if he doesn’t come in, or if his family doesn’t help them, she tells him, in a quite articulate way that she will rain fire down on the Mao family and make them regret the day they ever crossed her and the people of Earth.

On board the Rocinante the crew is contemplating the events of the past week. When they arrive back on Tycho they are treated like heroes.

When they tell Fred about the missing earth missiles he informs them that he has them. He’s not sure what he’s going to do with them but he’s going to hold onto them for safekeeping.

Holden tells Fred that they need to let everyone know about the Protomolecule but Fred disagrees. All that would accomplish is system-wide panic. For now, they should keep what they know under wraps, although it seems he’s more interested in looking out for the belters than he is for humanity as a whole.

Fred confronts Holden about an anomaly in their flight logs from their original trip back from Eros. He wants to know why they stopped for 5 hours. James tells him about Miller’s friend Semba and giving him a proper burial. Fred doesn’t think Holden is being straight with him. If they’re going to continue working together they need to be on the same team. But to Holden’s thinking, there shouldn’t’ be any teams.

Later Naomi tells Fred she wants to tell everyone about Miller and Julie’s story. She thinks it would help everyone to see how a Belter and an Earther/OPA member came together to save humanity.

Back on board the Roci, after some debate, the crew vote to destroy their sample of the Protomolecule. Naomi sets up the flight path to fly the missile with the sample into the sun, but she fools Holden by showing him is a simulation of the launch. The actual missile is still right where they hid it and she’s the only one who knows.

Elsewhere, Alex runs into some trouble at a Tycho bar when some guy doesn’t appreciate him flirting with his woman. Alex takes a beating before Amos, out of nowhere, comes to his aid.

Later, back on board the Roci, Alex finds Amos defacing a Martian flag and confronts him. The two have some words, Alex is not mad because Amos bailed him out at the bar, he’s mad because 25 belters died in their landing pod because he was trying to protect Amos.

Back on board Tycho, Naomi offers to help Johnson’s second in command to hack into the recovered nuclear missiles. She tells the woman that Belters need to help Belters.

At Ganymede Agricultural Station, a joint U.N.+M.C.R.N. Facility, Bobby Draper and her team are patrolling the border between the Martian and U.N. zones.

After Lt. Sutton on board the Scirocco disappears behind Ganymede’s shadow for 48 minutes all hell breaks loose.

The perimeter alarm goes off on the ground and the Martian Marines see the U.N. troops heading their way guns hot. Before they can report the activity their comms are jammed.

They notice a firefight has erupted in orbit but without communications, they have no idea who is attacking whom. Bobby orders her men to form up and hold their line against the U.N. Forces.

The scene cuts to several minutes later and the aftermath of a fierce ground battle. The Martian Marines are down. Roberta Draper regains consciousness only to see something alien standing over her.