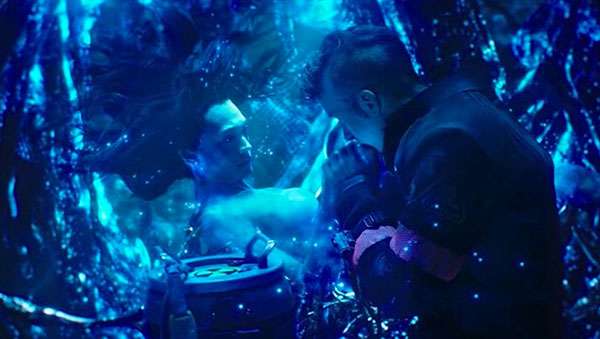 This week we continue season 2 of The Expanse with the episode titled “Home”.

Decrypted: The Expanse—OK, so we broke a few laws of physics here

The episode picks up right after last week’s. Eros has dodged the Nauvoo and is now moving fast sunward.

The U.N. Council on Earth is starting to panic. The asteroid is heading in their general direction. They saw the generation ship almost collide with Eros and aren’t sure what to make of it. Fred Johnson is claiming it’s an engine test gone wrong but they believe he’s lying, plus the Mormons are saying he stole the ship from them. Either way, they don’t have an explanation as to how Eros is moving like a ship.

Mars is just as confused as Earth is and denies any knowledge of what is happening. The asteroid has once again changed trajectories and is now on a collision course with Earth. If it hits it will cause an event larger than the one that killed the dinosaurs, 7-10 billion dead plus another 10 in the aftermath.

Their only option is to launch their planetary defenses at it in the hopes of blowing it up.

After informing Mars of their intentions the Secretary General and Errinwright launch half their missile arsenal.

Almost immediately everyone looses radar contact with Eros. The rock is still there, it just can’t be seen. And if it can’t be seen the nukes have no way of hitting it.

The U.N. Council is at a loss as to what to do when they receive a message from Tycho Station. Fred Johnson has a solution. Use an OPA ship to paint a laser lock to guide in the nukes. All they need to do is give him control of their missiles.

After some debate, Avasarala decides to send a message to the OPA ship directly. To everyone’s surprise, it’s James Holden that replies. He vouches for Fred Johnson and prays they all trust each other. On Avasarala’s word that Holden can be trusted, the Secretary General concedes and they give Fred control.

When Eros speeds up again, Avasarala is surprised that the Roci try to keep up with it, even at the risk of their own lives.

Later, Cotyar informs Avasarala that the rest of the council has evacuated the planet but she refuses to leave. She calls her husband Arjun on Luna. After a very touching conversation she tells him that it’s her duty to stay in order to protect Earth. Arjun doesn’t expect anything less.

On Eros the laws of physics are being rewritten. At the speed it maneuvered Miller should have been crushed, but he didn’t feel a thing and he still feels gravity even though the asteroid is no longer spinning.

Naomi manages to deactivate all the bombs on the surface but the damage to Miller’s bomb prevents her from accessing it.

The Roci crew notice a temperature increase from Eros and speculate it’s waste heat from what’s making it move. Without warning, it starts to speed up again. They theorize that if Miller is able to detonate his bomb where that heat is being generated they might be able to stop the asteroid in it’s tracks.

Miller agrees and takes his pet nuke for a walk while Naomi tries to figure out a way to get him off the rock. It will be dangerous but she’s determined.

The ex-detective enters the station and starts making his way to the heat source. It’s hard going. The bomb is heavy and he has to press the reset switch every 60 seconds.

He notices along the way that the Protomolecule only affected the living. It’s leaving the dead alone.

Time is running out, he needs to set the bomb and get out of there before Earth’s missiles arrive.

Whether by random chance or because of the nuclear threat, Eros speeds up again, forcing the Roci to push it’s limits to keep the target lock.

Miller realizes that he’s heading towards the Blue Falcon, the place where Julie Mao died. Along the way he starts hearing voices that are unmistakably Julie. He deduces that somehow, her conscience is still active and thinks it’s on her ship the Razorback. The Protomolecule must be using her conscience and everyone else’s to grow and power itself. But that also means that a part of Julie could still alive.

Miller believes he can reason with her but only if the Roci backs off so the missiles are no longer a treat. After some debate, Holden makes the hard decision to stop pursuing Eros.

Without explanation Holden contacts Fred and tells him to direct the nukes away from Eros. Johnson is between a rock and a hard place. Without knowing Holden’s plan he could jeopardize it if he doesn’t listen to the man, however, redirecting the nukes will look bad in the eyes of Mars and the U.N.

Miller reaches his destination and finds Julie. Or what the protomolecule has made of her. After an awkward introduction he tries to convince her to stop Eros from going to Earth. Julie can’t stop the Asteroid, the work needs to continue.

Miller tells her that he came all this way to find her because he believes in her. She’s a fighter. But all she wants to do is go home. He tells her that whatever she does, wherever she goes, she wont be alone. He’ll be with her.

The ex-detective removes his helmet and gloves, exposing himself to the Protomolecule. Whatever happens, happens to both of them. The two embrace.

His actions and words must have gotten through to her, because Eros veers off from it’s collision course with Earth and instead crashes into Venus.